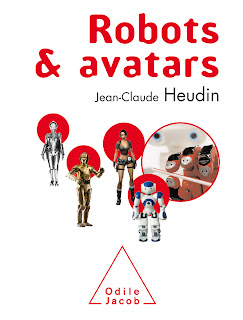 Sorry for that long delay but I was working on my new book, Robots & Avatars. Here is a "teaser":
Since the dawn of humanity, man tries to replicate the living. Among the legends that have influenced this quest, the myth of Pygmalion has a special place. Helped by Venus in the genesis of an artificial beauty, the ancient king fell to his irresistible charm. Since then, the descendants of Galatea has taken many forms: living statues to automatons, robots to cyborgs and clones, artificial intelligence to avatars, to the ghosts that haunt the memory of computers. This book brings together a collection of spectacular images that illustrate the evolution of robots and avatars. It reveals trends in a symbiotic future where the creator and his creation, science and imagination mix.
A final point: its in french... but the color illustrations are so nice. A great gift for christmas!
Posted by jcheudin at 5:12 AM No comments: 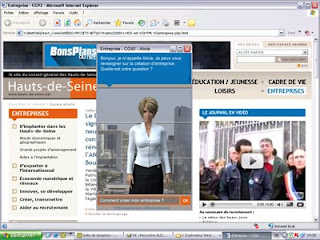 Alicia is the first on-line application of the EVA technology. You can discuss with Alicia on the following page. Alicia was designed for the french Hauts-de-Seine County near Paris to help people searching information about the creation of compagnies. Alicia implements a conversational intelligent agent that is able to answer questions in the french natural language thanks to its knowledge-base which includes near 500 rules. Don't be afraid ! Alicia is not based on the "schizophrenic" architecture (see previous post) but rather on a classical and simpler character design. The animated 3D interface was created by Jean-Philippe Lebrun and most of the integration work was done by Ilyasse El-Khaira. The FAQ knowledge base was implemented in the EVA language by Jean-Claude Torrel. Many thanks to them and also to all the people from the 92 County who works on the Alicia project.
Posted by jcheudin at 9:34 AM No comments: 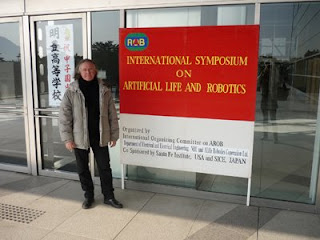 Our paper “An Evolutionary Nano-Agent Control Architecture for Intelligent Artificial Creatures” has been presented at the 14th International Symposium on Artificial Life and Robotics (AROB) in Beppu (Japan) last february. Here is the abstract of the paper: This paper describes a new multi-agent architecture for the Evolutionary Virtual Agent project. It introduces the nano-agent bio-inspired control architecture and its nanoScheme programming language. A typical application consists of one or more nano-agents, and possibly up to a large number if necessary as in natural swarms. As an example, it describes an online self-animated character that uses natural language and emotional expressions. This virtual character is based on a “schizophrenic” model composed of multiple distinct personalities, each with its own pattern of perceiving and interacting with the user.
Posted by jcheudin at 10:55 AM No comments: